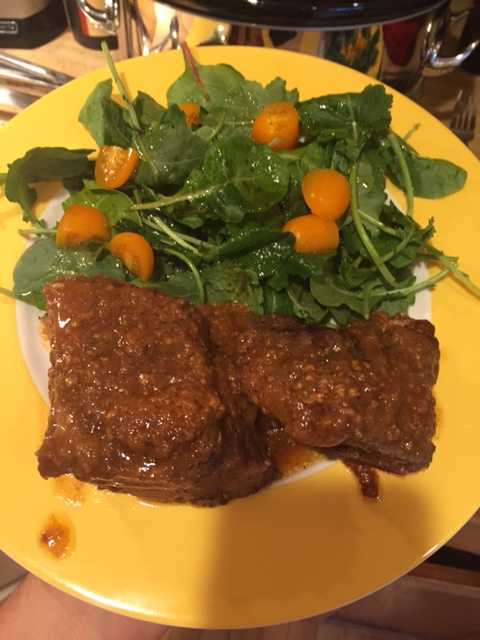 My first time making beef short ribs and thankfully it won’t be my last. While the sauce came out a tad too sweet for me, this dish it was a crowd-pleaser.

I’ve never cooked beef ribs in my life. Heck, I never even tried them until earlier this year. Where I grew up, if you wanted ribs pork was the only source.

Boy was I missing out.

So when I came across the BBQ Short Ribs in The Ketogenic Cookbook, I had to try them. My only problem: the equipment calls for using a slow cooker. I love crock pots. The idea of tossing ingredients into one, turning on the timer and walking away for 6-8 hours is awesome.

Unfortunately, my slow cooker isn’t so slow. In fact its faster than my crappy oven at times. But like my husband’s relationship with TGI Friday’s, I decided to give my slow cooker one last chance.*

Very few steps in this amazing recipe. Next time I plan to cut the sweetener from the BBQ sauce. Maybe I’ll replace it with some hot sauce!

For this recipe, I made my own tomato sauce without any sweetener. If you can’t make your own, just pick up something low in carbs and sugar-free.

Also the recipe calls for using coconut aminos. This is a great soy sauce substitute. Despite the name, it doesn’t taste anything like coconut. And unlike most soy sauces, it doesn’t have any wheat. So it truly is perfect for a keto diet. Unfortunately I only had 0 carb soy sauce…but it still tasted great!

*My slow cooker is now history. It cooked the ribs in less than 3 hours. Thankfully I was all over that cooker like a monkey on a cupcake.

**A word about the erythritol. I followed the recipe and added it to the sauce. It came out much too sweet for my taste. I do plan to make this dish again, but without the sweetener. It just wasn’t needed. Also after the meal my husband and I experienced cravings for sweets. Yikes! How can that be?

Turns out sweeteners can stimulate appetite and/or create sugar cravings.  I always assumed that this applied to sweeteners that raised blood sugar. Apparently for us it applies to all sweeteners. So I’m starting to purging sweeteners from our diet.