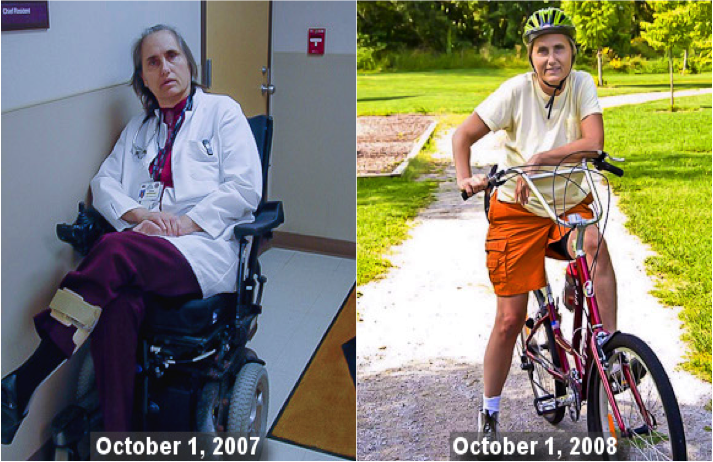 Her TEDx Talk went viral for good reason. Dr. Terry Wahls describes how changing her diet reversed her MS symptoms and got her out of a wheelchair.

Below is an amazing video on the power of eating healthy. Dr. Terry Wahls, a clinical professor of medicine at the University of Iowa, was diagnosed with multiple sclerosis (MS) in 2000. By 2003 she was in a wheelchair. Through her own research, and using herself as a guinea pig, she redesigned her diet using Paleo principles (yes, Paleo is low carb!) to get the essential nutrients for her brain.

The result? Within a year of starting her new diet, she got out of her wheelchair, stopped walking with a cane, and could eventually go on an 18-mile bike tour.

Putting The Healing Power Of Low Carb Diets To The Test
There are studies underway looking at low carb diets as a way to treat serious diseases and neurological disorders. As Dr. Jeff Volek says, weight loss is becoming a great side benefit to ketogenic diets. In his talk at the Low Carb Down Under Conference, he discusses promising new research showing other significant benefits of ketogenic diets on epilepsy, Parkinson’s disease, ALS, cancer, autism, brain injuries and Alzheimer’s disease (fast becoming known as Type 3 Diabetes) to name a few.

In an unscientific nutshell, the theory goes like this: our government’s recommended diet (high carb, low fat) is overloading our brains. Humans were not designed to eat the quantities of carbs and sugars on a daily basis as we have over the last 50 years. It’s now affecting our brain function and the result is the biggest increase in neurological issues than we’ve ever seen before.

Keep in mind, it’s just a theory and it’s being put to the test in studies. Nonetheless, the next time you eat out, you may want to pass on that breadbasket.

Side Note About TED Talks
Because her TEDx talk went viral, the conference group decided to put a large red box over her video (just click the box’s upper right corner to get rid of it) claiming it was “outside of TED’s curatorial guidelines.”   Now most of the TEDx talks I’ve watched feature “advice based on a personal narrative,” yet they don’t flag those videos.

In an interview with DietDoctor.com (subscription required at link, but the site’s info is worth it), Dr. Wahls said that TED originally planned to take down the video, but there was an outcry on social media. Apparently lots of doctors are recommending the video to their patients. So you see a viewer warning instead.

Turns out some of TEDx talks’ sponsors are pharmaceutical companies. Makes you wonder if there was any pressure by sponsors who happen to make drugs to treat MS.