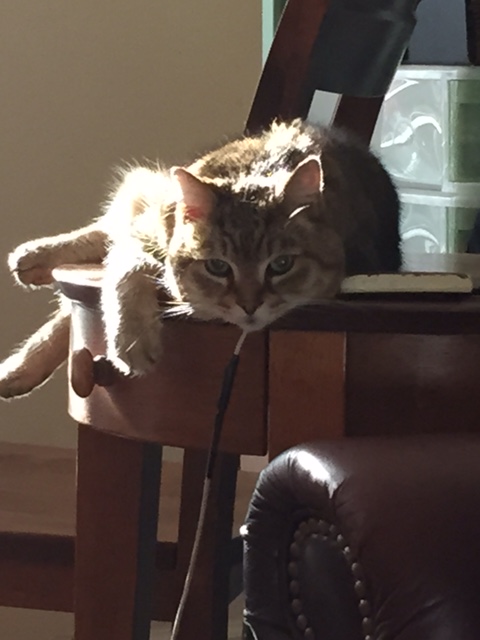 After 14 years, Spider still has a lot of attitude in him. But I’m convinced his high carb diet is taking its toll. I’m hoping his new low carb diet is just what he needs to fight off his bouts of pancreatitis.

About 6 months ago our kitty became deathly ill.

Leading up to it, he was constantly hungry. And yet, my 8-pounds of furry terror wasn’t gaining weight. In fact, he lost a pound. He became lethargic. Then the vomiting started. I’m not talking about the normal stuff a cat does. I’m talking about the green pea soup scene from The Exorcist. He was in pain and stopped eating.

After a lot of tests and blood work we learned Spider suffers from pancreatitis.

Pancreas – What Does It Do?
The pancreas is part of the endocrine and digestive system. It produces insulin to control blood sugar levels and enzymes that help digest foods. When inflamed, the pancreas leaks enzymes into the abdominal area. These enzymes start braking down the fat and proteins comprising other organs – basically the body starts eating itself.

Pancreatitis Causes
My vet couldn’t tell me what caused the pancreatitis. Spider doesn’t have liver or inflammatory bowel disease. He’s not diabetic (although my vet checked for diabetes once she confirmed the pancreatitis). He wasn’t exposed to pesticides, was infection free, and hadn’t experienced any trauma to his abdominal area.

When I suggested his diet might be the culprit, my vet wasn’t sure. In the world of veterinary medicine, pancreatitis hasn’t been linked to a cat’s diet (unlike a dog).

She asked what he was eating. I was feeding him Purina Pro Plan and was about to start mixing in a zero-grain food to cut his carbs. My vet cautioned me about changing his diet immediately. The key was getting him eating consistently. But once he was eating, she encouraged me to experiment slowly – not too many dietary changes at once – and see if he improves.

Once Spider’s appetite was back, I mixed the two foods and, sure enough, he improved. While we’ve had a few flare-ups since then, they didn’t last very long, and his pain subsided fairly quickly. So the mix of the two kibbles helped. Rather than moving him completely to a low carb diet, I kept the kibble at a 50-50 split.

All was going well…at least until last week.

Step one in moving my cat to a LCHF diet — getting him to start eating wet food. To help me, I picked up the “kitty crack” of canned food and a low carb kibble and some awesome protein treats.

Time For A Little Kat-O-Genics Eating
This time his flare up lasted for nearly 5 days. He’d show signs of improvement after taking his pain meds. But then he’d go back to staying in one spot for hours, until the dogs disturbed him and he’d go on the warpath – biting, pawing and hissing at dogs and people alike.

I started doing some research for optimum nutrition for my cat. It is amazing how little I knew about my cat’s dietary needs. Thankfully I stumbled upon catinfo.org, a blog written by a vet focused on cat health and nutrition. I’m learning loads on dry vs. wet food (wet is best), the importance of low carb diets for cats, how to switch to a wet diet (not as easy as it seems), and how to demystify those dang food labels.

My approach is pretty simple. Spider’s going as close to zero carbs as possible. If the pancreas is responsible for digesting all food – carbs, fat and protein – why not cut back on the one macronutrient that overworks that organ the most?

Of course, the pancreas is still needed to digest fats and protein. But by eliminating carbs, his pancreas can start healing. It takes his body more effort to digest carbs than fats and proteins. Plus, with a low carb diet, he’ll pump out less insulin (carbs, more than protein and fat, drive insulin secretion). Again, giving the pancreas some much needed rest.

With a dash of Parmesan cheese (yep, cat’s do like it), Spider showed interested in his beef and chicken Meow Mix.

The first step is switching him to wet food – a slow process that can take up to 3 months with a stubborn cat. And Spider scores high marks in stubbornness.

To help with the transition, I picked up several cans of the “kitty crack” of cat foods – Friskies, 9 Lives, Fancy Feast, Meow Mix. Yes, this stuff isn’t as nutritious as the more natural canned foods, but they are much lower in carbs than his current kibble. Also, they have the right type of protein makeup.

I also picked up Wellness CORE to replace the dry food. It’s made with mostly animal proteins and is low in carbs.

With any luck, Spider will take to his new diet and start thriving once again.